“Janmashtami” was celebrated in VKV Suklai on 30th August 2021. All the teachers and the students of class IX and X were present on the occasion. Sri Upen Deka Retd. Headmaster of Naokata Milan Girls M.E. School was the chief guest of the day, who inaugurated the programme by lighting of the lamp with Manglacharan. Some of the teachers presented “Bhajans” of Lord Krishna. One student of class VIII spoke on the occasion. There was a dance drama by some students showing the event of birth of Lord Shri Krishna, how it is described in the Indian mythology. There was also the event of ”Matki breaking” by the boys of class IX and X.

The historic 75th Independence Day of India was celebrated in VKV Suklai on 15th of August 2021. Before hosting of the Tri colour by the Principal, a ‘Sankalpa” was taken by all the teachers and students of class IX and X together with the passed out students of academic session 2020-2021 with the promise to serve the motherland at local, regional and national level. Everybody offered flowers to the picture of “Bharat Mata”. The cultural programme included patriotic group song, poem recitation and two solo dances by students. COVID-19 warriors like doctors, nurses and other health workers who devotedly served the common men during the very difficult COVID -19 pandemic situations for more than a year were felicitated in the schools celebration of 75th Independence Day. These people were from Naokata MPHC, Suagpur PHC, Maharipara SD and Jogen Basumatary Memorial Hospital, Suklai. All of our passed out students (of 2020-2021) were also felicitated by the Principal of the school. Police personals from Suagpur out Post Sri Sushil Chetry with the subordinates were also invited in the programme. They also got felicitation and also some saplings were planted by them in the school garden. A finger printing drawing competition was also conducted online for the students from classes Nursery to V.

‘Saraswati Puja’ was celebrated in VKV, Suklai on 10th February, 2019. On this occasion all the students, teaching and non-teaching staff and parents worshipped Goddess Saraswati by offering ‘Anjali’ and other rituals. A ‘Naam Kirtan’ party from Suagpur also performed kirtan on the occasion. Later on Prasad and food was distributed to all who came in the school. It was a gathering of more than 500 people.

The school celebrated ‘Republic Day’ in which the tricolour was hosted by the Principal. He also addressed the gathering. More than 100 parents attended the programme which had events like band display, group dance and a patriotic song.
In Suklai field, honourable MP, Sri Biswajit Daimary hosted the national flag. Our students presented band display, two dances, a group song (patriotic) and march past in the function.

National Youth Day (Swamiji Jayanti) was celebrated in VKV, Suklai on 12th January, 2019 along with the ‘Annual Day of the School’. The programme started by lighting of the lamp by the Chief Guest Sri Emmanuel Mosahary, MLA from 58-Tamulpur Constituency. Other eminent guests like Smt. Vandana Sharma, Lecturer in Political Science department, Goreswar College and Police Officers from Suagpur attended the programme.
The Chief Guest appreciated the performance of the participants and mentioned the contribution of Swami Vivekananda towards India in preserving the country’s culture. He also gave away some sports prizes and awarded the best athletes both boys and girls. Mrs. Sharma also addressed the gathering. The programmes included patriotic songs, dances, mime, etc.

'‘Gandhi Jayanti’ & ‘Shastri Jayanti’ was celebrated in VKV, Suklai on 2nd October, 2018. The programme started by lighting of the lamp by the Principal along with Mangalacharan. Children presented group bhajans and patriotic songs. A quiz based on life of both the leaders was conducted housewise. Also senior children took part in cleaning the school campus.

‘Universal Brotherhood Day’ and ‘Srimanta Shankardev Tithi’ was celebrated in the school on 11th September, 2018. Stories from the childhood of Swamiji along with his Chicago speech were the main events. Children also presented group song of Swamiji. Some selected students (girls) also presented cultural group dances and Naam kirtan. The programme started by lighting of the lamp by the Chief Guest Sri Bhagya Dhar Brahma along with mangalacharan.

'Teachers Day' was celebrated on 5th September, 2018 in the school premises. The programme started with lighting of the lamp by Principal Sir and Prakash Sir followed by Mangalacharan. On that special day class X students took classes for KG to class VIII students. The students of the school sang song for the teachers and performed dance on some songs which are related to teachers. Near about 50 parents were also present on that occasion

'Janmashtami' was celebrated in the school on 3rd September, 2018. The programme started by lighting of the lamp by the Principal. Children presented group dance and Krishna bhajans.
Junior children had pot decoration competition. Senior boys participated in 'Dahi Handi' competition(housewise) and senior girls in group bhajan competition(housewise). Around 100 parents also attended the programme.

'Independence Day' was celebrated in the school premises by hosting of tricolour by the principal. Some selected students presented group song and a patriotic dance. More than 100 parents attended the programme.
The school also presented band display by girls, march past by boys, a patriotic dance and a group song in Suklai public field where honourable M.P. Sri Biswajit Daimary hosted the national flag and addressed the gathering.

‘Republic Day’ was celebrated on 26th January, 2018 by hosting the tricolour by Chief Guest Sri Daya Ram Boro, retired in-charge of middle section of Naokata Milan Higher Secondary School who also spoke on the occasion. In Suklai public field, students (boys) presented march past and girls presented band display. Many other students presented patriotic dances. The national flag was hosted there by Sri Biswajit Daimary M.P. (Rajya Sabha). Many important army officers from Rangiya, police people and well known persons of the locality were also present on the occasion.

‘Saraswati Puja’ was celebrated in VKV, Suklai on 22nd January, 2018 where all the parents and students together with teachers enthusiastically participated. Many cultural programmes like devotional dances and saraswati bhajans were presented. A poem recitation competition for junior section was also there in English and Hindi. All those who were present worshipped Goddess Saraswati by offering anjali and chanting mantras. Flowers were also offered. Later on Prasad and food were distributed. Many parents helped in preparation of food and distribution of food, Prasad, tea etc. Suagpur police outpost officers with their subordinates also attended the programme.

Sister Nivedita’s 150th birth anniversary was observed in VKV, Suklai on 28th October, 2017. The programme started by lighting of the lamp together with mangalacharan.
The main events were - 1) Nibandha likhan spardha on various themes related to Sister Nivedita and cleanliness in our country. Students of classes VI-VIII participated in the competition. 2) There was also a PPT presentation by the students of class IX on the topic ‘Sister Nivedita’s contribution to our motherland’.
The occasion was marked by a bi-cycle rally by some selected senior students (VI-VIII) to spread the message of celebrating Sister Nivedita’s 150th birth anniversary among the people of the area. The rally started from VKV, Suklai to Suagpur and returned back.
Some other students cleaned the school campus which was a step in the process of ‘Swachh Bharat Swachh Vidyalaya’ programme.

"Universal Brotherhood Day" was celebrated on 12th September(11th September being a bandh). The programme started by lighting of the lamp together with mangalacharan. Students delivered Chicago speech of Swamiji and sang song on him. The significance of the day was told by one of the teacher.
Some selected students were divided into two groups who went to two different schools(Magurmari High School and Naokata Milan H.S. school) with escorting teachers to celebrate the programme.

1. Teachers Day was celebrated in the school on 5th September. 2. The programme started with Lighting of the lamp together with Manglacharan . 3 Students presented cultural programmes like solo and group dances , group song and a drama . One student also spoke on the significance of the day.

'Srimanta Shankardev Tithi' was celebrated in the school premises on 23rd August. The chief guest on the occasion was Sri Bholanath Subedi, a social worker of the region. A naam kirtan party also came to attend the programme of the school from Naokata (Naopara region). A group of senior students also sang naam kirtan with proper instruments.

"Independence day" and "Janmashtami" were celebrated together on 15th August, 2017. The tricolor was hosted by Sri Tilak Ch. Bhuyan 11th APBN of Dergaon. Significance of the day was said by one of the teachers. Students, teachers and parents together sang National Anthemn.
Later on the function of "Janmashtami" was celebrated in school which included Krishna rhymes, Group dance, Krishna Bhajan and significance of the occasion.
After the school programme was over, the students as well as all the teachers went to Suagpur Community Hall where the National flag was hosted by honourable M.P. Sri Biswajit Daimary Sir who addressed the public also on the occasion. Senior students of VKV, Suklai presented march past and senior girls participated in band display. Some selected students presented patriotic dances.

Rakshabandhan was celebrated in school on 7thAugust, 2017. The programme was started with mangalacharan and lighting of the lamp. Significance was told by Rajesh Naidu sir. Class X students offered rakhi to Swamiji and a plant. After tieing of rakhi to all the students, some selected students went to nearby places like Naokata, Milan Higher Secondary school, Suagpur police out post, Vivekananda Kendra Jogen Basumatary Hospital etc, to tie rakhi to people over there. "International Yoga Day" was celebrated on 21stJune, 2017 in the school premises. Respected Principal Mr. Suman Dhar and Asst. Teacher Mr. Prakash Sarmah sir did lightening of the lamp followed by manglacharan by our students. Baruah Kanta Brahma, headmaster of Uttar Betna High School was the chief guest of the programme. He as well as Principal delivered valueable speech on usefulness of Yoga. Two Yoga instructors from 'Patanjali Yoga Kendra', Suagpur came to school to instruct the students throughout the programme.

'World Environment Day' was celebrated in VKV, Suklai on 5th June, 2017. On that day, students as well as teachers went to different places such as 'Jogen Basumatary Vivekananda Kendra Hospital', 'Suagpur', etc to plant saplings. Essay writing competition and art competition was also organised by the school. 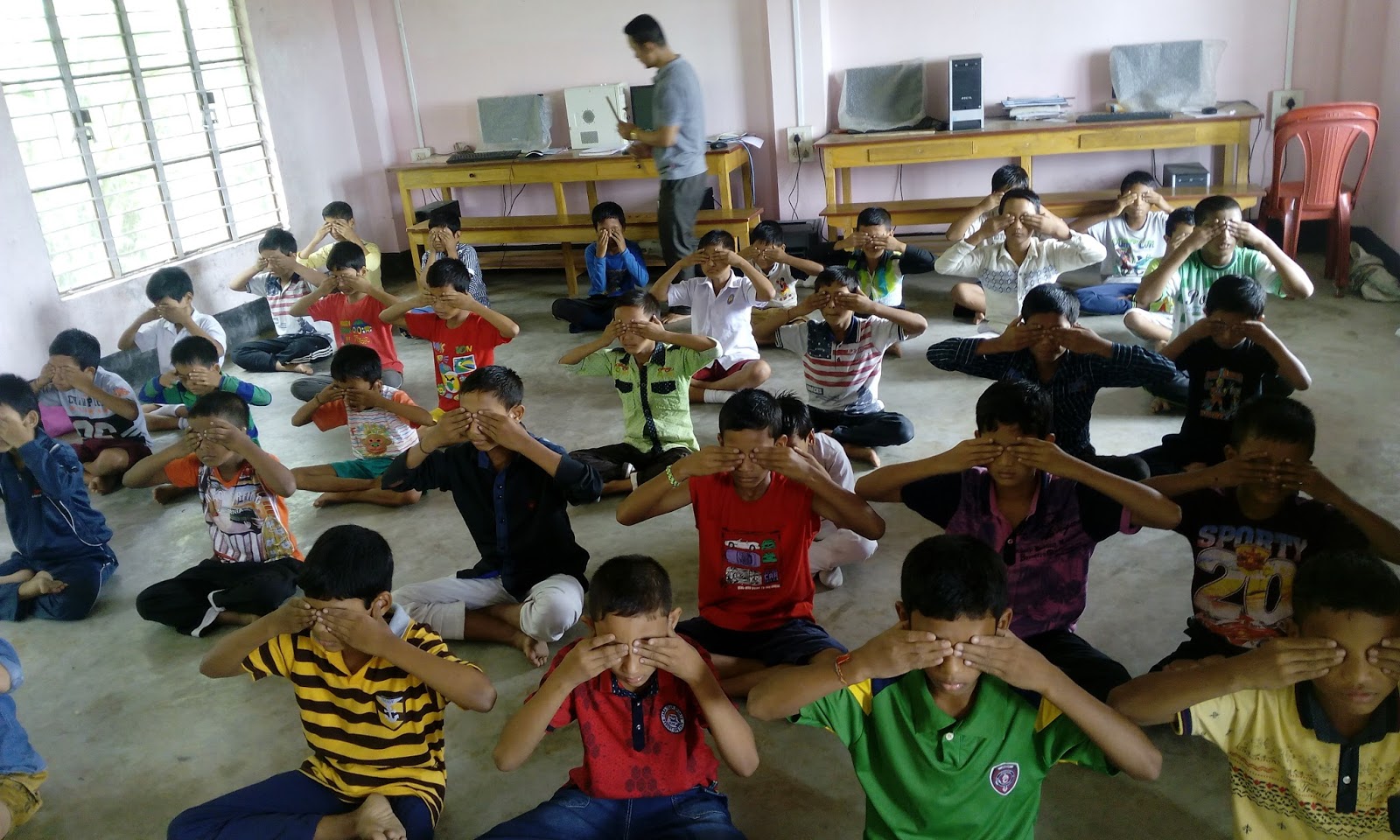